What is Rape Culture?

“Rape culture” is a term that describes an environment where rape is pervasive, normalized and accepted as inevitable. Rape culture does not necessarily mean that society or individual people promote sexual violence in an outward, active manner. Rather rape culture is largely perpetuated via unexamined and false beliefs.

Rape culture teaches people not to get raped.

We should be teaching people not to rape.

Rape culture normalizes sexual violence and as a result, victims and survivors may not understand what happened to them as rape. They may think they are “overreacting” and decide not to talk to someone, get help or report the violence. Even if they do recognize what happened to be sexual violence, rape culture can cause them to blame themselves, feel guilty and/or ashamed and feel afraid that they will not be believed, including by professionals and authorities.

Victim blaming can come from friends, family, the justice system, the media, and society in general. Victims/survivors may also blame themselves due to internalized victim-blaming.

Victim blaming is a central component of rape culture.

What would you add to the info graphic below about challenging rape culture? 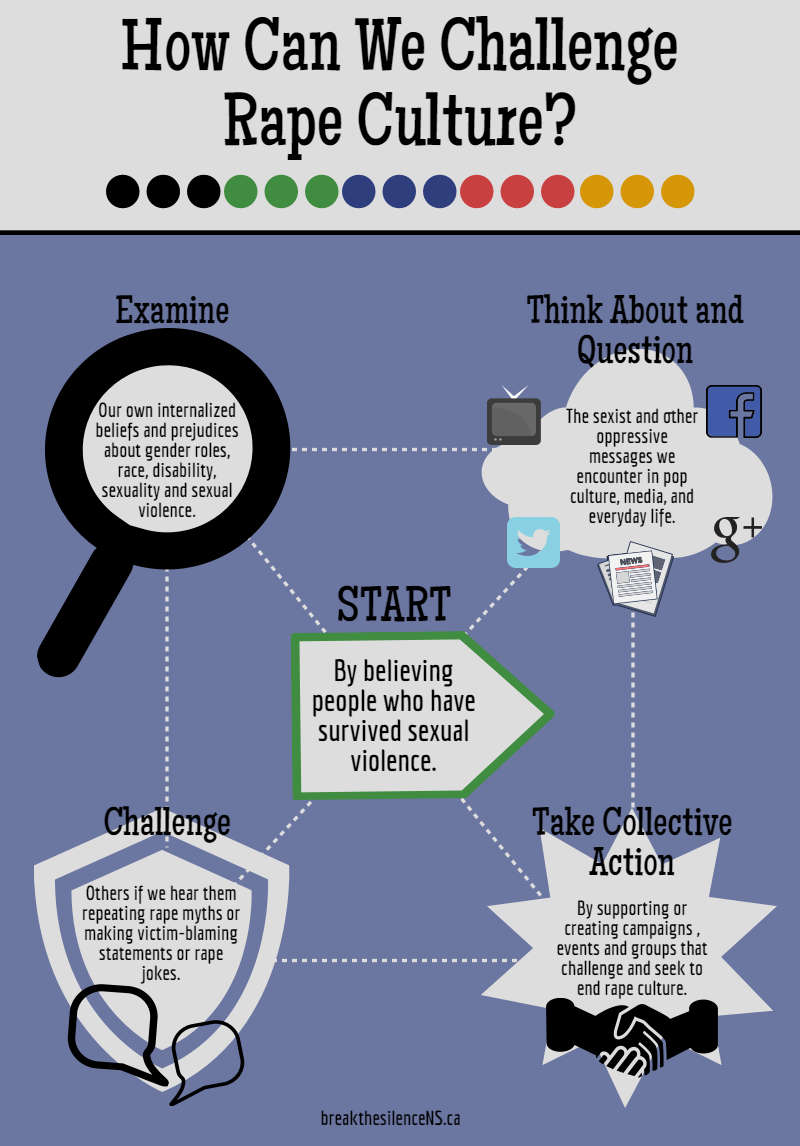 What are Rape Myths?

Many people do not feel comfortable reporting sexual violence or getting support due to the prevalence of rape myths. Rape myths are common misconceptions about sexual violence, the people who have been subjected to it, and those who perpetrate it.

These myths impact how victims/survivors are treated (and if they are believed) by police, media, the justice system, and even friends, family, and community. They can cause a victim/survivor to doubt or blame themselves or fear that they will not be believed. Rape myths are misleading, harmful, and still very present in our collective thinking.

Reveal the facts about rape myths below to increase your awareness.

"Women want to be pursued and dominated."

Women have a diverse range of wants and needs when it comes to sexual activity.

Sexual consent means asking what someone wants and needs, and doesn’t want or need, listening carefully, caring about and respecting that answer. It means paying attention to how the other person(s) is/are doing throughout, and asking if you are unsure. It is also about working to address the power imbalances present in each sexual encounter and creating space for a no, verbal or otherwise.

People “ask for it.”

No one asks or deserves to be sexually violated.

Regardless of what someone is wearing, if they are drinking or using drugs, if they are flirting, or if they were sexting, no one asks to be sexually violated. Going to a party, walking through a park, going upstairs or home with somebody, etc. also does not mean a victim/survivor is to blame. Additionally, if someone enjoys having sex (whether a lot or a little, with one person or many different people), this does not mean that they are “asking” to be violated.

Prison rape jokes are unfortunately very common. Sexual violence is prevalent in men’s and women’s prisons and is perpetrated by prison officials and other incarcerated people. Indigenous and African Nova Scotian people, particularly youth, are overrepresented in Canadian prisons, and as such, are at increased risk of sexual violence. Those most at risk include: non-violent first-time offenders, youth, LGBTQIA2S+ people, people living with a mental illness or disability, and sex workers.

Transgender people forced to serve their sentence in a prison that matches the sex they were assigned at birth, such as a transgender woman in a men’s facility, are especially at risk.

"Many victims/survivors lie about what happened."

False claims of sexual violence are extremely rare. When people accuse victims/survivors of lying, they often point to changes, or perceived inconsistencies or gaps in the victim’s/survivor’s story. Gaps in memory are actually very common after someone has been sexually violated or otherwise traumatized. This is because the brain files memories differently when people are under threat. Changes in a story may occur as new details are remembered. This is normal.

"There is always evidence of a struggle."

Many people do not physically struggle when they are being sexually violated.

Not physically struggling can be an automatic survival response or a conscious strategy. Under threat, the brain’s and body’s response is fight, flight, or freeze – these are all automatic responses and we usually do not get to choose. Many victims/survivors do not physically fight back due to fear, shock, numbness, and/or dissociation.

"Some people cannot be sexually violated."

Some people believe that sex workers cannot be sexually violated. Sex workers are people who have the right to set boundaries and engage in consensual sexual activity, just like anyone else. Ongoing consent is mandatory, regardless of whether someone is accepting money for sex.

Some people believe that men cannot be subjected to sexual violence, but if they are, then they are not “real men.” This is untrue and stems from ideas about gender roles that shame men for expressing emotion or talking about sexual violence.

"It wasn’t sexual violence if the victim/survivor was aroused or orgasmed."

Arousal and orgasm are both involuntary bodily reactions and do not mean that someone consented or enjoyed what was done to them. People who perpetrate sexual violence often use this to convince the victim/survivor that it wasn’t sexual violence and to keep quiet.