Reporting to the Police

If the Victim/Survivor Chooses to Report

When a victim/survivor chooses to report to police there will be a series of steps. How the process unfolds will depend on the perceived seriousness of the crime and whether the accused pleads guilty or not guilty. The length of the entire process varies and can take several months, or even years. There are often lengthy periods between each court hearing.

Can the accused claim that they mistakenly thought they had consent?

In court, the accused may claim that they thought they had consent, and the judge may accept this argument.

According to Canadian law, a person cannot claim that they thought the victim/survivor consented when:

The accused also cannot claim that the act was consensual because they waited a sufficient amount of time after a “no” and the victim/survivor did not express a “no” again. If someone communicates no, it is a no until the person agrees to the same sexual act. 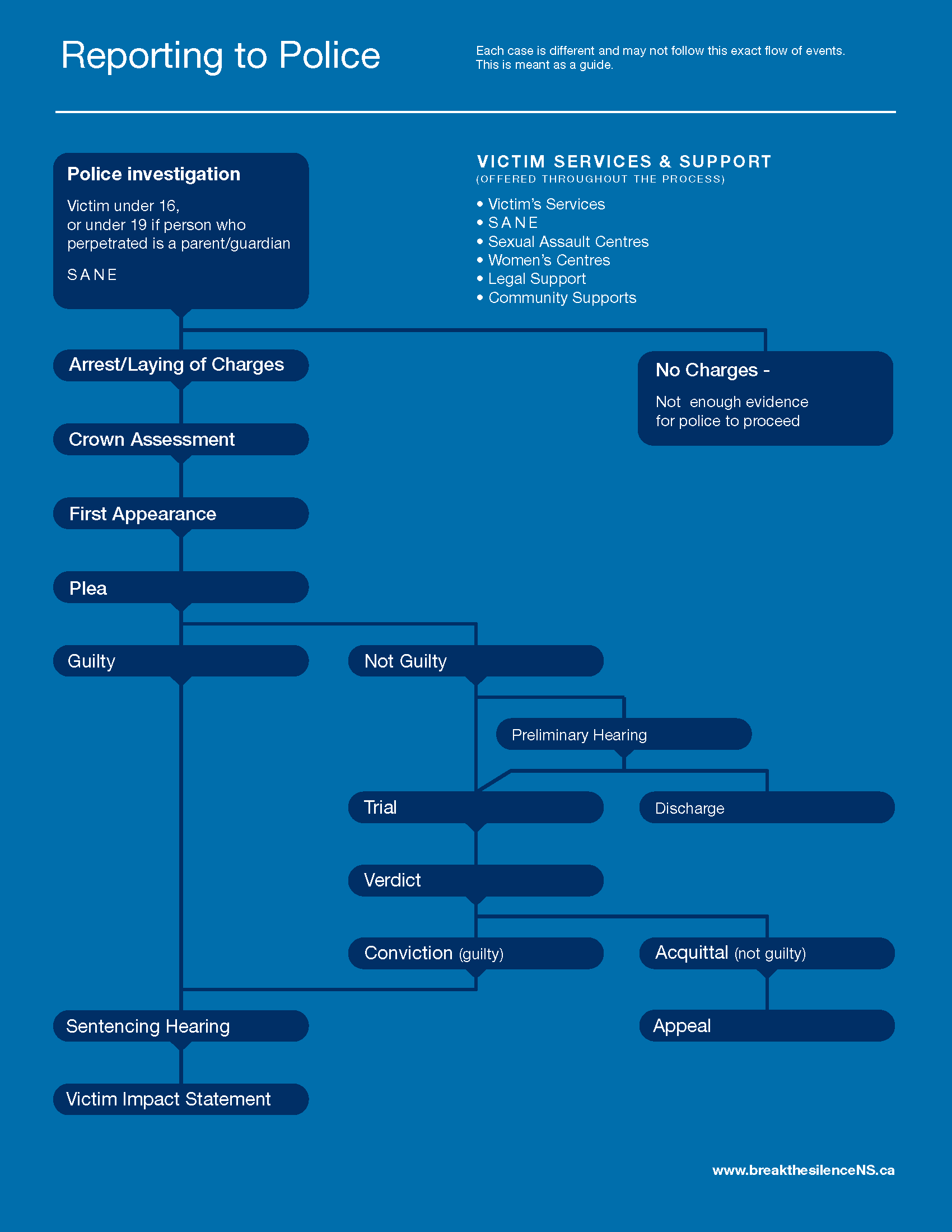 Click on any of these steps in the flow chart to read more.

If the person chooses to report the sexual violence to the police, the police will first take a statement. It is important to know, that this statement is videotaped and will be used as the person’s “official statement” regarding the sexual violence in court. However, the videotaped statement does not eliminate the need for the person to give testimony in court. The victim/survivor can bring a support person to the police station, but the support person cannot be in the room when the victim/survivor gives their statement.

The statement and any further communication with the police about the event will be disclosed to both the Crown and the Defence lawyers and can be used or shared in court by either party.

If the sexual violence happened recently, the police will also collect evidence, which could include clothes, items from the location in which the assault took place, and pictures of any marks or injuries. They may also interview any witnesses who were present or have relevant information.

The police will then question the person who perpetrated the violence (called “the suspect” during the investigation and the “accused” if charges are laid).

The officer in charge should communicate with the victim/survivor throughout the investigation.

Some people may opt to get legal advice regarding, for example, their statement to police, or what they could reasonably expect before they report.

If the person you are supporting is under 16 (or under 19 when the person who perpetrated the violence is a parent or guardian), then you must alert your local child protection agency, even if this information was told to you in confidence.

Child protection social workers will then work with local police to conduct a joint investigation, which will include an interview with the child/youth (a social worker and police officer will be present). Whether investigators contact the child/youth directly, or a parent or guardian, to set up the interview will depend on their age and the circumstances of the violence.

If required, Child Protective Services can help arrange a physical exam, and will discuss additional supports with the child and/or parent(s) or guardian(s).

If the assault(s) took place within the last five days, the victim/survivor will be able to access the services of a Sexual Assault Nurse Examiner (SANE). If the person you are supporting is pre-pubescent it is recommended that they see a SANE within 24 hours as it can be difficult to collect evidence. They are still able to access a SANE if it has been longer than 24 hours.

These registered nurses are available 24/7 in the Halifax region, within Lunenburg and Queens Counties, and Antigonish, Pictou, Guysborough and Richmond Counties and have advanced training in providing non-judgmental, confidential support as well as conducting medical exams and collecting forensic evidence. People of any gender can access this service so long as they are 13 years and older (except in the Halifax region, where Avalon’s SANE program serves all ages).

The Provincial Victim Services Program, through its four regional offices, can provide you with information, support, and assistance as your case moves through the criminal justice system. The victim/survivor has access to these supports throughout the process, even if charges aren’t laid. The victim/survivor can also access other supports including women’s centres, SANE, and legal and community supports.

Charges will only be laid if police determine that there are reasonable and probable grounds to believe the person committed an offence. If charges are laid, the case could take months or years to work its way through the courts.

Once a person has been arrested and charged with a crime, they become “the accused”.

If the person is arrested, they are usually released within 24 hours, sometimes with an order not to contact the victim/survivor. If police do not release the accused, they must be brought before the court for a bail hearing within 24 hours. A bail hearing is where a Judge decides if the person charged with an offence should be released or held in custody until trial.

If the person you are supporting is worried that the accused will try to contact or harm them, they should contact the Crown Attorney (http://novascotia.ca/pps/contact.asp).

Victim Requests that Charges are Withdrawn

The victim/survivor still has access to all supports, including victim services.

Not Enough Evidence for Police to Proceed

The Crown will proceed with the case if they believe there is a realistic prospect of conviction and think it is in the public interest to do so. This is a higher legal test than the one that the police use in deciding whether to lay a charge.

The first appearance is the first time the accused will be in front of a judge.

If the suspect self-identifies as Aboriginal (they do not have to have status or live on reserve), the judge, Defence, or Crown may request what is called a Gladue Report.

Prepared by an independent Gladue Writer, the report is a pre-sentencing or bail-hearing report that takes into consideration factors such as (but not limited to) the person’s history with residential schools, child welfare, and sexual or physical abuse.

The report also takes into account any learning disabilities, mental illness, fetal alcohol syndrome, past trauma, or substance use or abuse. The report also includes the impacts of racism and poverty on the person’s life.

The report can also include if the person has taken part in traditions, celebrations, or family gatherings such as fishing, sweat lodges, dances or cultural events. It will also identify sentencing options that are available in the person’s community.

The report is taken into consideration when the Judge determines eligibility for bail as well as a sentence.

The accused pleads guilty or not guilty.

If the person pleads guilty there will be no trial, but instead a sentencing hearing where the judge will impose a sentence.

The first time the victim/survivor will have to appear in court as a witness is for the preliminary hearing (a mini trial in front of a judge). This is where the judge decides if there is enough evidence to go to trial. The accused will also be present and other witnesses may be called. Note: There is not always a preliminary hearing.

If the person pleads not guilty there will be a trial where both the Crown and Defence lawyers will ask the victim/survivor and other witnesses or experts what happened before, during, and after the incident.

Because of the presumption of innocence the accused is not required to testify on the stand and be cross-examined. The trial will take place before a jury or judge.

A trial can be a difficult, stressful, and triggering experience. If a person chooses to report sexual violence and it goes to trial, it is incredibly important that they have a strong support network and practice self-care before, during, and after the trial.

The victim/survivor can ask the Crown to request courtroom aids such as a translator and/or a screen to block their view of the accused.

In Canada there is a law referred to as the “rape shield” law, which prevents Defence lawyers from using a victim’s/survivor’s sexual history against them in court. Unfortunately this law can be overturned and/or ignored.

If an application is made by the defendant to include a victim's/survivor's sexual history in court, the victim/survivor is now entitled to free legal representation on this specific matter.

The formal decision or finding made by the judge or jury.

In order for someone to be found guilty of a sexual assault three things must be proved in court:

The judge or jury may take hours, days or much longer to reach a verdict (a decision of guilt or innocence).

The judge determines an appropriate sentence for the offender (accused who has been determined guilty). A sentence may include jail time, community service, and/or registry with the National Sex Offender Registry.

If the jury/judge find the accused is guilty, they will be convicted. This means they will receive a sentence. A sentence is the punishment given to a person convicted of a crime.

If the jury/judge decide the accused is not guilty, they will be acquitted.

Both the Crown and Defence are able to appeal the verdict or sentence within 30 days.

Why might people be hesitant to report to police?

This program provides up to 4 hours of free, independent legal advice for victims/survivors who are 16+ years of age who were sexually assaulted in Nova Scotia. Registration is done through an independent agency, 211 Nova Scotia, and participants do not have to report to police or take legal action if they use this service.

To register, a victim/survivor can call 2-1-1. They do not need to provide details about what happened. They only have to say that they were sexually assaulted in Nova Scotia, and that they would like to speak with a lawyer.

Once registered, a package will be mailed with a certificate number for 2-hours of legal advice. The package will also have a list of participating lawyers.

The victim/survivor can choose any lawyer on the list.  To help make the choice, there is a biography about each lawyers’ background and experience. All of the lawyers have been screened by the program, have received training, and have agreed to follow the program’s terms.

To learn more, visit: https://novascotia.ca/sexualassaultlegaladvice/ or call 2-1-1 or download the pamphlet here.